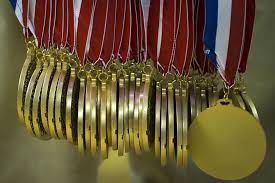 Sitting in a packed ballroom with hundreds of other journalism students, the editors of The Rider Online and The Arena yearbook waited in suspense. Having traveled hundreds of miles to San Francisco for the chance to hear “The Rider Online” over the microphone, tension was high. As the National Scholastic Press Association (NSPA) executive director read off newspaper after newspaper, Rider Editor-in-Chief Amanda Granato began to lose hope.  “And the last Online Pacemaker goes to…”

Legacy journalism’s online newspaper, The Rider Online, and its yearbook, The Arena, will end the year with several new additions to the award wall. This year, The Rider was awarded the Columbia Scholastic Press Association (CSPA) Silver Crown award, the  Pacemaker and the Interscholastic League Press Conference (ILPC) Gold Star award. The Arena won a Silver Crown and a Silver Star, in addition to a Best In Show award at the NSPA convention in San Francisco.

“I’m extremely proud to have been a part of the team that worked hard all year to deserve these awards,” Granato said. “It’s such an honor to have a place in Legacy Journalism and a place in the world of scholastic journalism.”

The Gold Crown, Pacemaker and Gold Star are the highest honors awarded by each organization. 32 students were also awarded Individual Achievement Awards by ILPC for their writing, photography and designs.

“I like the recognition my students get for their work,” Adviser Leland Mallett said. “A lot of times people think it just happens, but there’s a lot that goes on behind the scenes [in journalism].”

Having won four Gold Crowns, two Pacemakers, and four Star awards, The Rider Online has achieved national recognition for its success. The Arena yearbook has also been nationally recognized, having received three Silver Crowns, four Silver Stars and two Pacemaker nominations since the first book was published six years ago.

“It’s really an honor knowing all of our hard work has paid off as a staff,” Callaway said. “I appreciate the recognition we’ve received for putting so many work hours into these books. My favorite feeling is hearing ‘The Arena yearbook from Mansfield, Texas,’ being called out over the microphone and then being able to stand up in front of a huge crowd at a convention and receive the award on behalf of my staff.”

Here are the winners from all organizations: